The German Pharmacy Museum
located in the Castle of Heidelberg

The first public dispensaries developed from medieval stalls in the surroundings of churches or on the market-places to shops in solid buildings, which were also situated at central areas like the market-places of the time’s rising towns.

Unlike the situation in today’s modern chemist’s shops, until the 17th/18th century it was usual that the officina (area of sale and production) or officine offered no access to the client.

Doctor’s prescriptions had to be handed out to the pharmacist through the shop window (on the left of the picture). Consequently, the table in the centre of the dispensary’s room might not be considered as a counter but as a preparation table where the medicine was mixed on prescription.

Even if the client wasn’t allowed to enter, he could at least have a look into the shop. That might explain why the furnishings were often impressively fashioned and highly expensive.

Subject of this section of the museum is the equipment, i.e. instruments, tools, and vessels with all their differences, their steps of development, and new inventions from the officine of the old to the more modern chemist’s shop.

Two officine dispensaries, outstandingly well integrated into the architecture of Heidelberg Castle, vividly form the historical setting and take our visitors back to the 18th century. The officine form Court Pharmacy, Bamberg (fig. 2), consists of original furniture, e.g. an exceptionally valuable Rococo period preparation table (fig. 3) from the former Court Pharmacy of Bamberg, and completions made in the same style. It represents a dispensary which at first was installed to produce for the prince-bishop’s court exclusively, and was opened for public use only much later.

The second officina shown here originates in the Ursuline convent at Klagenfurt (Austria, fig. 4), representing a monastic pharmacy which the public had no possibility to visit in person. As marked in its crowning mass of arabesques, this pharmacy seems to be built in 1730. The letters IHS (Iesum Habemus Socium, “Jesus is our Companion”, as inscripted in the Jesuits’ crest) refer to its origin and use in a religious environment.

The shelves of both officines are decorated with typical pharmacy vessels like the valuable vibrantly coloured faiences which were imported from abroad, and the impressive looking glasses with their enamel paintings. We also can see hot-water bottles in pewterware there, with gaps left open in order to keep e.g. the delicate baby-bottles warm. They show in an exemplary way that even in former times the range of goods in a pharmacist’s shop consisted not only of medicaments but also of practical peripheral products. In the officine, there is always found a valuable pair of scales on the preparation table. A variety of other equipments and tools, such as spoons of horn, hand scales, sets of weights, spatulas, mortar and pestle and other bowls for crushing solid materials, as well as many other things liveley convey an idea of how the work in an officina was done.

The museum collection includes 10 officinas from the 18th up to the 20th ct.  For example in room 3 the the tour leads directly into a pharmacist’s shop of the early 19th century (fig. 6). The cherry-wood furnishings made according to the instructions of Christoph Jakob Faulhaber, its owner, once decorated the “Crown Pharmacy” at Ulm. In the exhibition you can find out why these furnishings had to be taken out on the orders of a supervising commission in the late 19th century, how it was given to the Town Museum of Ulm, and how it was removed once again into a chemist’s shop during the 20th century before it became a part of the stocks of the German Museum of Pharmacy. 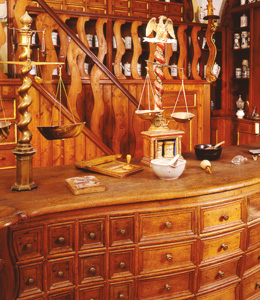