The German Pharmacy Museum
located in the Castle of Heidelberg

For centuries in history, a distinctive individual emblem was a mandatory part to each pharmacist’s self-presentation. Decorated plaques indicated either the name of the shop, or of its owner. In many cases – since only few people were even able to read – the drugstores’ names were illustrated with animal figures, fabulous creatures or patron saints.

The indication Council or Town Pharmacy added to its proper name assured the pharmacist’s legal standard. In some cases, there were also used biblical (St. Mary’s Pharmacy) or regional links: e.g., Lion Pharmacies are often found in regions with lions as heraldic animals in their princes’ coats of arms whereas Eagle Pharmacies are typical for Prussia, where the eagle was omnipresent as a heraldic bird. Also fabulous creatures like the unicorn e.g. were popular name patrons for pharmacist’s shops.

Consequently, the section “Emblems of Pharmacies” is actually one of the main attractions of the museum’s collection. It includes not only some of the oldest plaques (like the one from the Court Pharmacy of Füssen, 1696, e.g.) and many charming animal figures, but reconstructs the steps up to the current symbol of pharmacy also. Special exhibits substantiate preliminary stages on its winding historical path of development. There is, for example, “the Emblem of the Three Spoons” from the late twenties with its radical modern design (from the era of "Neue Sachlichkeit", designed by Richard Rudolf Weber, 1900-1994) which didn’t survive the influence of Nazi-aesthetics in all spheres of society after their “seizure of power” in the 1930ies. 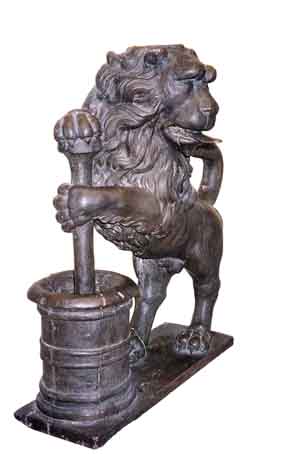 An imposing selection of home and travellers’ first aid and pharmacy kits is displayed in the area of the officina.

Whether at home or while travelling, in these first aid kits healing or strengthening medicaments in little glass bottles or small metal boxes were always at hand, together with small spoons to take the remedies, tweezers, or little knives, often sticking in handy cases or bags constructed to be folded out.

The development of mankind’s necessity of first aid in case of illness or injury is easily comprehended looking at the stories told by the  museum’s exhibits themselves. The traveller’s pharmacy kit from Augsburg e.g., once belonging to a war-lord of the 17th century, is one of the most extraordinary pieces of our collection. Elaborately made of ebony, it is studded with silver mounts and richly equipped with glass and silver vessels.

The vast range of our exhibits also includes a plain leather case originating in the Fifties, with sticking plaster and Eau de Cologne.

The museum is also presenting its most valuable collection on the subjects of “Faith” and “Healing”.

Reasons and causes for diseases seemed inexplicable and mysterious to the people in former times and weren’t interpretated and treated as rational as they are in our days. Most unknown phenomena, including illnesses, were explained religiously, as godly punishments or trials, or strokes of fate.

Consequently, in the history of pharmacy theology and the development of medicine and medical remedies were always closely connected. In many cases, a priest also was supposed to be a “healer” or a “wise man”. The idea was that if divine powers were assumed to effect the individual’s health, a faithful or rueful patient should be able to get better by ritual mediation or treatment of a priest-healer.
Thus, the “healed” expressed their thankfulness in very many different votive gifts and procedures, traditions which can still be found all over Europe in many different ways of handling.

In Christianity, Jesus Christ and Mary were regarded as the most influential helpers against diseases, accompanied by about 70 saints over the course of time who were mainly invoked against special infirmities. So people threatened by plagues hoped for the help of the Saints Rochus and Sebastian, others trusted in Saint Blasius against diseases of the throat and in Saint Vitus when affected with convulsions.

Since the 16th century, the arts started elaborating on the image of Christ as a pharmacist healer. To people of former centuries, healing the human body was inseparably connected to the salvation of the individual’s soul. The painting shown in the museum’s exhibition pictures Jesus Christ, the Saviour, in a real pharmacy with vessels not filled with medical substances but virtues to start with, medicaments for the treatment of his patients’ souls (fig. 1).

The holy brothers Cosmas and Damian (fig. 2) were the patron saints of all physicians and pharmacists.

In Greek antiquity, Asklepios, a son of the god Apollon, was venerated as a powerful god of healing. Special Asklepios cult sites were accessible to the sick seeking for healing in spending the night in one of these temples. They were hoping for the god to appear to them in one of their dreams, and bring them healing or a revelation of the right treatment. Asklepios’ daughter Hygieia is considered to be the Goddess of Health. The Romans adopted the Greek god under the name of Aesculapius whom they regarded as being embodied in the snake (fig. 3).